Is The Wine Business Sustainable?

There is a lot of talk around the concept of 'sustainability' so much so that it loses its meaning. What makes a business - any business sustainable?

When you work in the wine business, you soon discover the reality is not the vision guests to wineries have. When a guest comes to a winery, they are greeted by owners and tasting room workers poised for hospitality. They have their best foot forward. And just like all of us, what you present to guests invited for dinner isn't reflective of the struggles you had during the day. In the same way, the wine industry puts out an image of a gracious lifestyle, but that's not the heart of the business nor is that what makes the business sustainable. This is a business that has its makeup and culture rooted in the reality that you really can't do this alone. At a minimum, you have to depend on God, Mother Nature, and luck to make a year. You have to depend on farm workers to execute and harvest on time in the right way. In fact its really harvest when that all comes together. That short window is all you get. That is a whole year's worth of sales and that intense period is the canvas that underpins the true culture of the community and in the end makes the wine business sustainable.

When I graduated with my undergraduate degree, I was hired as a management trainee at a major unnamed west coast bank, given 3 months of lending training (no kidding .... 3 months) and assigned as an Agricultural Officer in Lakeport, the County Seat of Clearlake CA. You'd think I'd have some feel for the Ag business because I grew up with a farmer's field in my back yard. In the summer, I'd push through the old redwood gate, cross the train tracks and ask to "help" the Mexican workers harvest. I think they were more entertained by me than anything else because they worked fast and I could barely walk to keep up with them working on their knees. But I'd help as best I could and they would pay me by giving me all the culls. I'd take them around the neighborhood in my wagon and make a buck or two. Anyway ... not to get too far off task, as a lender I had absolutely no clue what I was doing nor did I have a sense of the depth of emotion and culture in the farming business. I was too young when exposed to it. But as a lender now .... a guy making loans to farmers in Lake County, that was a totally different world. What was I going to tell a farmer who had 40 years in the business?

It didn't matter because back in the day, my customers helped me! That was an eye-opener. They saw I was hopelessly lost as a banker and you know what? Instead of treating me with disdain because I couldn't give them professional advice or make a fact based decision, they helped me! I'd ask questions and discovered farmers were a caring and patient group. Patience is a necessity when dealing with weather, pests and disease. Each of them took the time to talk to me about spider mites, co-ops, walnuts, overhead sprinklers, pears, cattle, pigs, and oil spray. Maybe they helped because I was interested, but I felt a part of what they were trying to do; delivering produce to the table and keeping something for their own families. That was the beginning of my understanding of the true culture of the farm business. And in the first year, when November came and the crops were in, just before Thanksgiving, all the farmers started to bring in gifts for me.

That first year in 1981, I was handed a case of wine, boxes of cookies (with walnuts), candied walnuts, walnut oil (Lake County had lots of walnuts) a freshly butchered turkey, and several lugs of kiwi, apples and different varieties of pears. I was dumbfounded my customers would want to give me anything, but in those actions I discovered a commonality in the farm community; they shared the bounty. It was an act of gratefulness and tradition.

One man who I will never forget who taught me more than he knew was a first generation immigrant named Esteban Partida who looked something like the guy to the right. Esteban was a man who came to this country with nothing, earned enough in field work to purchase a small ranch, and with it raised a large family. He lived simply and by his faith on a year to year basis with no operating reserve. If it was a bad year, he would eat less. Esteban would come in to the bank smelling of oil-spray at least every other week to tell me what he was doing and ask how I was coming along, so I got to know him pretty well. Then just before Thanksgiving that year, he brought me one of the smoked ham's from the hog he'd butchered. While unprofessional, I couldn't help myself. I honestly broke down in front of him when he dropped it on my desk. It was too much. I figured he needed that for his family more than gifting me; a single guy in a studio apartment. But that was the way the community operated. Farmers shared and while I was concerned about Esteban, he was more concerned that I was supported and knew people appreciated what I was trying to do for them. 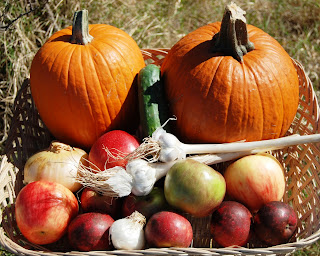 There is not much difference today decades later except I'm a little more experienced. For the field workers, cellar workers and winemakers, harvest is dirty, hard work and its prosecuted during insane hours. Everyone understands you only get one harvest a year and when its time to pick and vinify, its all hands on deck. But when the grapes are mostly in, there is still something that takes over in the mood of farm country. Many of the seasonal workers take their earnings back home and spend time with their families after long separations, recharging for another year. For the winemakers, it means sleep and an opportunity to get the purple off their hands. For owners, its a sense of gratitude and that is expressed in many different ways. Some have harvest parties for their workers and families. Some drop a case off at the office to share with bank staff. Some take the time to spend time with their most important clients or get away with their own families. Some look for other charitable ways to give back and strengthen the community but the mood is a prevailing one.

In the end, that pragmatic acceptance of whatever the year delivers a farmer is reflected in a spirit of sharing and gratitude, and that more than anything else is what I believe makes the wine business a sustainable industry and one that will outlive us all.

Please feel free to offer your comments on your own impressions of my comments, the wine business, its culture and future sustainability.


Posted by Rob McMillan rmcmillan@svb.com at 9:02 AM