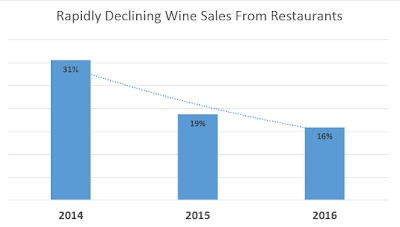 I Will Always Love You


Every credible measure that I see regarding restaurant wine sales is trending negative for the small family-run wineries. Why? What's behind the declining trend? Economics? Changing consumer attitudes? Conspiracies from wholesalers? Big wineries displacing the small ones? It's not due to a lack of desire from restaurant owners.


How Did We End Up Here?

Going back into the 1990s, family-owned wineries were able to get about 30% of their total sales from restaurants. That was the high point.

The 1990s were quite an outlier compared to the factors that drive wine sales today. In the middle of the decade because of acute grape shortages, wineries could sell every drop produced and more if they had it. The middle 1990's signaled the start of the current wine boom.

Driven by a thirsty Boomer, to sell wine you just needed to make it without major flaws. Restaurateurs and distributors were begging wine producers to please give them wine. Can you imagine that?

'We love you guys and we'll always be there for you,' was the refrain from distributors. Interesting and distinctive wine from small producers was uniformly available in the large chain and independent restaurants alike. That all changed when the Tech Recession hit in 2001.

You Said You Loved Me? 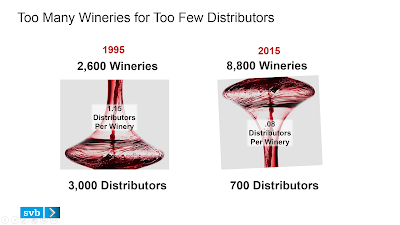 When 2001 dawned distributors woke up to the fact they had a customer base of large buyers to satisfy. Those buyers were getting bigger by the month and were demanding more uniform offerings. At the same time, the raw number of wineries in the US was growing exponentially. There were too many wineries and too few distributors, so something had to give. So not only did distributors stop saying 'please' to small wine producers, they stopped answering the phones altogether!

With negotiating power now decidedly in the hands of buyers, restaurateurs did the understandable thing and focused on other parts of their business, letting winery owners and distributors court them instead. That power shift was the start of the declining trend of sales to chain restaurants by the average winery.


<Winery Owner> I thought you said you loved me? <Restaurateur> Well I do but your wine costs me more than $20 a bottle and my customers don't want to pay the markup to $60 I need. There are so many beautiful wineries courting me now so unless you can be cheaper than the one I'm dating - and she's really cheap, I just can't love you anymore..... but it's not you. It's me. 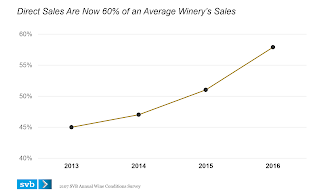 Thank goodness the Granholm Decision was passed in 2005. That gave winery producers an alternative path to market. If they were kicked out of a distributor's book, they could go direct to the consumer. But Granholm didn't solve the problem of getting access to chain restaurant placements. That part of restaurant sales was essentially closed off for most wineries starting in the early 2000s.

Post-recession, instead of buying a bottle of wine at a restaurant, consumers opted for a less expensive craft beer or spirit. Ever the practical generation, instead of paying a 2x markup over the same bottle they could find in a grocery store, younger consumers started a new and very practical behavior. They began a practice called the "pre-party" before getting to the restaurant. Once there, they could have just a glass of wine or a healthy (free) glass of water with dinner. (Note: One is officially old when they start putting a younger generation's slang in quotes.) Solution? It seemed everyone had the same idea at the same time: We are going direct to trade with a by-the-glass program.

While I acknowledge the benefit of that kind of a program, wine producers had to fight tooth and nail to get those placements, often dropping the price to unpalatable levels. But it moved bottles and gave restaurants the margin they wanted. It was at least positive for brand building, right? And by-the-glass also helped to improve full bottle sales in the given restaurant. But be honest: Doesn't beg for discounted by-the-glass placements for a month at a time make you feel cheapened?

Interloping Consumers Having A Say


The small winery and the consumer have been the ones that have lost out with Distributor Consolidation, especially when it comes to large restaurant and hotel chains. But I noticed an interesting Bloomberg article that was published on May 16th titled "Mom-and-Pop Joints Are Trouncing America's Big RestaurantChains."

Americans are rejecting the consistency of national restaurant chains after decades of dominance in favor of the authenticity of locally owned eateries. It’s a turning point in the history of American restaurants, according to Darren Tristano, chief insights officer at Chicago-based restaurant research firm Technomic. "This really seems to be the dawning of the era of the independent," Tristano said. "The independents and small chains are now outperforming. The big chains are now lagging."

Consumers are more concerned today about the ingredients in their food and appreciate a link back to the producer. While I'm not a fan of the term 'authenticity' simply because it's become a marketing shtick thrown into every description of a consumer product, authenticity is what consumers want. They want a connection and an experience the independent restaurant offers. They want the real thing to coin a phrase from an old marketing campaign.


It’s “authentic” and Instagram-able experiences that diners are searching for these days, said John Gordon of Pacific Management Consulting Group in San Diego. “It’s not experiential to sit in a rundown McDonald’s.”

So You're Telling Me There's a Chance?

This article intimates the consumer is dismissing the glitz and glamour of Madison Avenue hyped chains and is looking for an independent restaurant that can deliver on service, experience, and on an emotional connection. Taking it further, this article can be pointing to a consumer who thirsts for the real thing - wine made by the barrel in small quantities.

This emerging trend of consumers embracing independent restaurants plays right into the wheelhouse of the small producer. That's the restaurant the big wholesalers can't efficiently service. That's where relationships can be built between wineries and the restaurateurs themselves. That's where discussions can start about fair markups of your wine that will improve the playing field for winery and restaurateur alike.

I'm telling you there is a chance to see the declining trend in restaurant sales reverse itself for small wineries because today's consumers are looking for you; the authentic family-run wine producer. You are the real thing. Your wine is what they want. They will love you and so will consumers ..... if they can only find you, fairly priced at those independent restaurants.

Weigh in with Your Thoughts and Opinions!!

Posted by Rob McMillan rmcmillan@svb.com at 9:00 AM