Can Wineries Increase their Bottle Prices?

That is a question all wineries are asking: When will they be able to meaningfully raise bottle prices and recover their margins? To get at the answer, you have to start by answering the question, what drove the prior pricing increase in the 90's into the 2000's? The answer is the middle-class and the Boomers.

The Great Recession wasn’t that great for anyone but it outright sucked if you were in the middle class. The middle class is that section of the population that was more likely to have lower savings, lower stock market exposure, and a higher percentage of their net worth centered in their homes. Since 2000, the middle class has shrunk in size, wealth, income and optimism about their future according to a recent report from The Pew Research Center. The impact of the weakening of the middle class will continue to linger and impair the wine industry's ability to pass on the higher costs of grapes for many years to come.

The Middle-Class in the US has been the world’s most voracious consumer and the largest user of consumer debt for decades. We've essentially consumed our way to prosperity and then sold debt to the World to finance our consumption.... which is a trick to explain. Most of that consumption has been from the middle class and since the early 1990's when Boomers came into their own and drove wine consumption and bottle price increases, the middle-class has also seen their wealth increase.... at least until 2007 when wealth crashed back to 1983 levels as you can see in the title slide. How did we see that kind of growth in consumer debt and wealth?

Consumer debt became easier to get starting in the 1960’s when Bank of America started sending out their BankAmericard. That later became Visa in what was the largest IPO in the history of the US at the time. Consumer borrowing was encouraged by the US Government when they made consumer interest tax deductible in an effort to spur consumption. The Regan Tax Reform Act in 1986 disallowed the deduction for consumer interest but made interest in a home equity loan deductible instead, thus starting a mass run on home equity lines of credit. People paid off their credit card debt in favor of equity lines. Banks started packaging that debt and selling it off in blocks and securitization took off in the 1990's, transferring risk off bank balance sheets and allowing underwriters on Wall Street to make a ton of scratch just processing the debt issuance, taking a fee and transferring the risk.

At that point consumers went back to the well and started using credit card debt, running that up and then refinancing that into higher value homes beginning a consumer spending cycle that went on for decades. By the time of the market collapse, the middle-class consumer was far more likely to have their wealth concentrated in real estate equity, and carried higher debt levels percentage wise then the other wealthier and poorer cohorts. They were killed in the market collapse compared to wealthier cohorts who had a more balanced wealth structure, and even compared to the poorer cohort who had no real estate wealth to lose. But it is that demographic that was the fuel that sparked the heavy and consistent growth in wine consumption since the early 1990's. Today, that same demographic cant refinance their consumer credit cards and aren't likely to spend ahead of their earnings as a consequence. 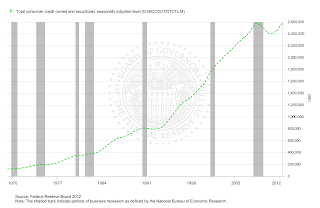 That brings us to today. Take a look at the chart to the right. You can click on it to get a larger view. Notice the dip in consumer debt at the crash. Also notice the change in consumer credit growth rates starting in about 1993? Compare that to the growth in the Total Wine Consumption chart below and you will see the graphs are eerily similar after the 1990's.
What we've seen in the past 20 years is consumerism with an unsatisfied appetite. But what we are going to experience in the next 10 years, is Boomers who have the wealth and drove consumption prior, slowing in their profligate spending simply because they are ending their prime consumption years. The Gen X crowd are those that are the most obvious consumers and should be the targets for wineries today, but it is a smaller cohort. Millennials will play the hoped for role but that is a decade away For now, we really need to see the middle class continue to heal, and I believe that is likely. Why? Because the destruction of middle class wealth and income has been so severe, it can only improve.

There is a long way to go still in a middle-class recovery. Those wineries expecting rapid price increases like we've seen the last 20 years will be disappointed. Modest increases are available because supply is trending to shortage but even then, foreign substitutes hold that up. The only real hope for price increase is if inflation is allowed to run up, and in my opinion - that would be the smartest thing the Fed could do as it would deflate the National Debt. But that's a long discussion for another day.

What are your thoughts about the middle class in America? How will that demographic impact wine consumption and pricing in the next decade?