Is it Politically Correct to make a Profit?


What is the long-term outlook for the US wine business? Having been around the business for more than 30 years now, I can remember different phases in our industry's evolution and I'm constantly thinking about just what was happening to shifting demand and why, because those patterns can predict the direction we're heading next. I remember when there were 13 states that had reciprocal shipping laws and wineries shipped only to about 30 of them.  I remember when drinking was bad for you. In fact when SVB began in the wine business in the early 90s, we were just moving out of a time of a structural change that led to declining demand both in gallons consumed and per capita consumption as you can see in Figure 1 above.


I remember Bartles and Jaymes exploding onto the scene driving huge consumption and then dying back. I remember the years of mass imports and mass marketing for Blue Nun, Mateus, and Lancers Rose (They made really cool candle holders too). I remember the 1980's that had two moderate, or one long, recession depending on whom you believe. Those were the days when people actually thought wine did not contribute to a healthy lifestyle. I know..... it's hard to believe. Since then, scientists have decided wine consumption is as good for you as broccoli and we’ve had nearly 20 consecutive years of growth in consumption. Why? What's the reason for imports moving into the market and having success at one point? Whats the reason U.S. consumers started inhaling copious amounts of US wine and left the imports later?


Beyond the Judgement of Paris which reflected the serious growth in US wine quality, and the French Paradox which gave us all an excuse to drink again after it fell out of favor in the 80's, I'd suggest three main things propelled the growth in consumption of US wine. 1) Foreign wine stopped their assault in mass advertising in the 1990's.  2) the Boomers median age was 35 in the middle 90's; the lower band of an age when consumption of all things is at its peak and they discovered along with Madison Avenue, Mass Luxury. 3) Certainty for investors which led to the greatest period of growth in wealth this country has seen during the decade of the 1990's. The impact on the wine business was that the Wealth Effect took over, and those healthy and wealthy Boomers wanted a gracious lifestyle. They wanted fine living. So we saw continuous growth in shipments and higher prices as consumers traded up.

Just this past week, Bill Gross posted in his Blog the "Cult of Equity" was dying. The short treatment is he thinks future returns in the S&P are going to be far less than what we've experienced historically. Bill Gross is the Co-Founder of PIMCO Advisors who have close to $2 Trillion under management. Bill's bias is toward bond trading but when he speaks, people listen. His op-ed was loud and clear and generated a fair amount of rebuttal from those who make their money on equities. Case in point is the research done by one such fellow on Bill Gross' stock calls in the above chart. Reading this, its hard to know why anyone would listen to Gross. The countervailing view is the S&P is range bound but almost an historic bargain, the Fed continues to issue supportive statements as they did on Wednesday, home values have bottomed and the US economy is recovering. But Gross's views, and similar self-interested opinions like that create a level of fear uncertainty and doubt in markets.

The ECB and Fed actions are really what is driving most investment moves these days. I remember the days when stock moves were based on fundamentals or technical analysis. Imagine that. Today? Its nuanced messages out of Bernanke and Mario Draghi that have investors guessing about QE3 and survival of the EU. What happened to the good old days when businesses created products, service and the framework for business to operate? Today markets move based on if Ben will extend Operation Twist or if the Germans will support the ECB's need to control the landscape for Satellite Country Banks, outside of their own country's Governments control. Since nobody can predict the moves by either Central Bank, the investor sees uncertainty and prices that into the market, killing wealth creation.

Then there are those actions that have taken place in Washington. Tops on my list of those creating market uncertainty is the political gamesmanship that pit Wall Street versus Main Street, and the continuing saga fanning the flames of class warfare between the Millionaires and Billionaires versus the rest of the U.S. populace. On the one hand, President Obama and the left talks at the business world and asks for their cooperation to create jobs, and in the next breath throws the entire lot under the bus to gain favor with the middle class vote. We need a healthy business climate to see recovery and yet the foundation for which our system of commerce has been based is falling into disfavor; self-induced in part by obscene greed in the ivory towers, but at the same time politicized in Washington as never before.

An article in the WSJ last week spelled it out pretty well: Why Capitalism has an image problem. I liked the authors summation:


If it is necessary to remind the middle class and working class that the rich are not their enemies, it is equally necessary to remind the most successful among us that their obligations are not to be measured in terms of their tax bills. Their principled stewardship can nurture and restore our heritage of liberty. Their indifference to that heritage can destroy it. 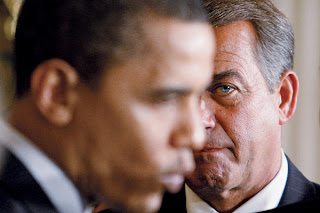 The kind of self-dealing and cronyism that creates distrust among the masses will never build back investor confidence, drive wealth creation and then spur demand for consumption of any goods, let alone wine.

Second on my list of Washington idiocy is the finger-pointing in Congress that places more emphasis at assigning blame to the other party and keeping the opposition from gaining credit, versus doing anything that can actually help the economy. The old politics that allowed compromise has turned into tit-for-tat retaliation and I'll scratch your constituents and earmarks if you scratch mine. That disabling rift led the Republican controlled House to block a debt ceiling increase in November of 2011 that in past votes had only received token debate. This was political chicken - like two cars driving headlong toward each other, and the Republicans were willing to drive the momentum of the country's recovery into a wall in an attempt to gain the upper hand in the debate over our Nations debt and proper stewardship of our children's future. The outflow of that decision was the downgrade of the US Governments AAA rating. Now as we approach the next Fiscal Cliff, investors are pricing in uncertainty for something that was never in the past even a risk.

In Silicon Valley Banks 2011-2012 State of the Industry Report and again this year, we reiterated our belief that the US wine business was at the beginning of a long term growth pattern. We still believe that despite the grim view of the last few paragraphs. But if you were around in the 1990's to see that market and that kind of growth in pricing and demand witnessed, don't expect that same thing to happen this time around as we see the business recover. While Inventory is in balance and trending to shortage again, the producer's ability to increase price at this stage is limited because the investment environment is impaired, even with historic low interest rates. Its being limited by European Union dysfunction and unapologetic greed and self-interested statements from Wall Street. It's further limited by class warfare emanating out of the Obama Administration, and by a Republican party led by John Boehner who would rather play chicken with the debt ceiling in order to make a statement about run-away spending, rather than support the fragile recovery.

The wine business in the US is at one of those inflection points as we discussed last week in SVB on Wine. As a banker who sees the financial statements of hundreds of private wineries, I can tell you we are seeing outsized success in the financial recovery of the forward thinking wineries who see the landscape in front of us, and make clear business decisions based on that vision. The separation of the best performing and the next layer of performers has never been greater. There are wineries right now that are just hitting the cover off the ball and making record profits. That is encouraging for a business that just came out of an unprecedented demand shock. The sad part is their success today - in fact the financial success of almost any business  - seems to have fallen out of political favor. What does that mean for the future of American capatilism?

When will it be politically correct for business people to make a profit again? What do you think?
Posted by Rob McMillan rmcmillan@svb.com at 8:09 AM