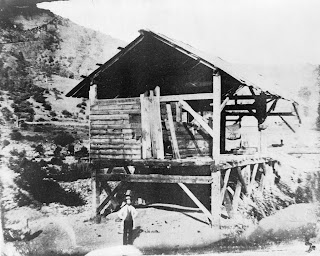 As a native Californian, we were forced in grade school to make the pilgrimage to Sutters Mill in Coloma to see where John Sutter and James W Marshall discovered some yellow flakes in the mill tailings; starting the California Gold Rush. It was a long bus ride to look at a stream and an old log mill that we couldn't even climb on. There weren't even snack bars there. And if that wasn't a big enough rip-off, I didn't see any gold there.

As we know from history, there were some who hit it big in the Gold Rush. But the ones who probably did the best weren't the ones who dug for gold. They were the ones like Levi Strauss who sold the miners their provisions as the costs of essentials like flour and dried beans skyrocketed. It was a seller's market. What does that have to do with the wine business?


In January of 2006, we published a report on Transitions in the Wine Industry that got some attention. In it, we talked about the speed of transition in the business to the NextGen and M&A activity. The quote that got the most attention was the one where we said 51% of wineries planned to go through a change in control in 10 years. Most suggested it was poppycock. The nice thing about a forecast that far out is nobody remembers 10 years later what you said, and there's no way to prove we were wrong when it is written.

It is getting closer to that 10 years date and it's probably time for an update to that study to see how accurate we were. I'm guessing we are probably on track in part because the Great Recession accelerated the velocity of change, but anyway... to that surprise I was talking about:

Last night I got an email from a colleague in our Santa Rosa office. He told me all the appraisers were running out of bandwidth and were going to have to stop taking business for the summer. What? I thought that was probably hyperbole. No way could appraisers be that backed up. But to my surprise when I asked one of the appraisers we use, the reply was: "It's busier than I ever remember and it will probably get worse. It will be difficult to get any appraisals come fall and winter." Really? I'd done several deals already this year and hadn't seen any issue getting appraisals. So why the dramatic shift?

Starting with the early report on transitions, we discovered at the time the early entrepreneurs in the wine business were getting fatigued and were ready to move on. The skills that it took to run the business early had evolved and a working retirement was no longer possible. But the big shift that's taken me by surprise; the time it's taking for an appraisal, has to do with grape supply.

In early 2011 we said in our Annual State of the Industry report that the supply of grapes was much more in balance than people thought. Early this year we said were "trending to a shortage." At the same time, the credit markets in the background were healing and commercial loan demand started to climb and get very competitive for the best business. Wineries now are doing all they can to tie up land and grapes needed for their own programs. They recognize this shortage isn't going to be a short-term issue.

The consumer mortgage business is a disaster still and will be for some time to come. That will be the discussion for another blog later. But the markets for real estate debt in the wine trade are fully engaged and there is a healthy appetite for growing loans. The last piece is the improvement in the US economy and that is encouraging entrepreneurs to look for new vistas, at a time when because of the Fed stimulus, interest rates are at all-time lows.

I've noticed the uptick in activity. I've seen entrepreneurs, new entrants, wine businesses from all over the world looking for US targets, existing domestic wine businesses, and strategic acquirers; they are all descending on the wine business this summer. It seemed like there was good action out there, but this much?

It's officially become a seller's market. There's not really gold in the vineyards, but we have apparently hit that point in the cycle where like the gold rush, we will start hearing rumors of absurd prices paid for land fueling seller's hands in driving higher and higher prices. Not only will appraisals take longer, but we can also expect to see prices paid for appraisals go up sharply and a rush of less experienced appraisers enter the business. It's going to be an interesting summer and fall.