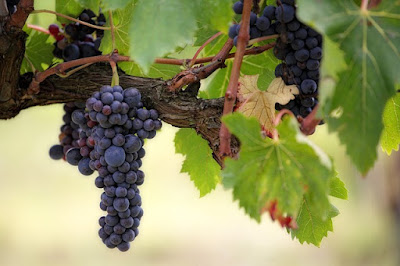 
The wine business runs in cycles when it comes to planting. Trying to guess which grapes are needed and just when they are needed is a trick, especially when it takes 5 years to get a fully mature yield. And it's impossible to predict planting decisions effectively without making some guess on demand.

We have been through excess before, but the cycles aren't always created by the same circumstance and this one is unique.


In the middle 1990s, there was such a strong demand for wine, grape shortages were widespread and grape prices rose rapidly. In our bank's client base, it was common for wineries to run out of bottled wine, well before the next vintage could be bottled.

Mondavi started to import Chilean bulk wine for the first time in large volumes to help fill demand. I remember one client from the era, now gone who told me, "I only sell wine to people I like. If I don't like them, they don't get my wine." That was a unique time and those circumstances haven't been seen since. 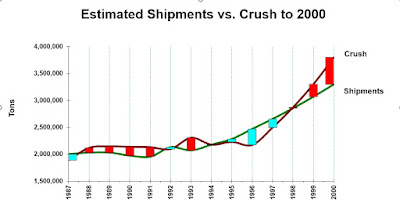 In response, during that same period planting exploded. At a point, I became concerned about the speed at which sticks were going in the ground, so I researched, developed and published the nearby chart.

We were, in my estimation, close to having supply balance at a macro perspective by 1998, and didn't need to plant anymore. But we still kept planting because there weren't enough grapes.

There wasn't great analytic science behind the development of the model. I didn't have perfect shipment information, especially since I was trying to convert shipments backward into tons. I had to make some educated guesses and make some estimates especially on restaurant sales, then create a forecast off of that. It was at least useful. Looking back 15+ years, it was probably more accurate than I knew at the time because we did move into an ear of oversupply exactly as I'd guessed.

That was a supply whip. We went from being short on supply to be quite long in what seemed like an instant; the combination of The Tech Recession, 9/11, wholesaler changes and massive non-bearing acreage - each adding to compound the problem. Demand for wine was still moving sharply higher, but not quick enough to absorb all the grapes.

Since then, we've gone through several cycles due to long or short harvests in regions but in the background, we've been watching the annual growth rate in wine slow to the point where at present, total volume demand for wine on a trailing 12-month basis is no better than zero, based on several sources. 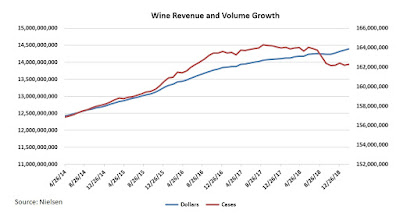 Today, wine supply is moving into unknown territory. We have now reached the point where we have a large and unhealthy excess in grape supply in all price segments. The factors creating this however are unique and nothing like the extended oversupply period of the late 90s and early 00s. We've not experienced this set of circumstances before and that means the responses that worked in the past, may not work this time.

From a demand perspective, we are seeing negative volume growth in those regions that produce wines that are positioned below $9 at retail. That's an issue that's been well documented.

More recently though, volume in higher price point regions has shown zero to minimally positive growth rates, and luckily still modest positive growth in sales dollars. On a volume basis, we are close to hitting slack. We haven't seen negative volume growth since 1994 in the business, but we are very close to that today.

It would be great if we had short bulk supply, empty storage tanks, and we were looking at a light harvest. But talking to brokers and vineyard managers over the past 6 weeks, there is unanimity of opinion that even on the North Coast, we will leave fruit hanging on the vine this harvest. Not everything is contracted. And the early consensus for yield is we are picking out at average, to average-plus yields.

It's probably not a surprise given those facts that we are seeing much lower prices paid for uncontracted grapes - if there is a buyer for those grapes. That mirrors price drops on the bulk market too. There just aren't enough buyers.

With wineries full of supply and short on demand, we will see a modest number of contracts expire after this year without being re-upped at current prices. I don't have a gauge on a number but that's a consistent response I'm getting today from producers.

How will grape growers cope with the supply issue? That's where we are in uncharted territory. In the North Coast in days past, vines could be pulled early that needed replanting, moderating additions to supply. Growers could also drop fruit they might let hang in better times. And in a doubling-down approach, some growers have crushed uncontracted fruit and hoped for a return when price improved in a year or two. 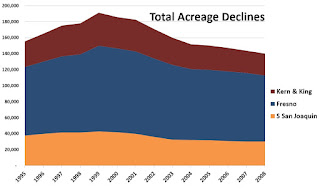 The problem with those strategies is they all depend on seeing better volume demand growth within a short time. Making projections of increased demand in the next couple of years is becoming increasingly more difficult under the circumstances discussed.

And on the third strategy above, crushing uncontracted fruit will probably add costs that you can't recover in two years. That's a short way of saying that this current cycle can't correct itself in two years.

In the Southern Central Valley during long periods of excess, vineyards can be been pulled and replaced by pistachios, almonds, and pomegranates. Growers can and have moved on to something else; the benefit of diversified farming approaches. In the Central Coast, some of the heavy production vineyards can be replanted as well.

What about the North Coast? How will supply and demand equilibrate to stabilize price if demand on a volume basis doesn't improve longer-term? Growers on the North Coast don't have profitable alternative crops to plant. Long gone are apples, pears, walnuts, prunes, and poultry. There are less expensive places to farm than Northern California and those crops have found those locales.

The question many are asking is, "How long will the imbalance last?" Under the circumstances, I don't have an answer that is encouraging. My guess isn't one anyone will like, so I think I'll sit on that prediction for a while.

There Are Solutions But They Take Time

The best solution to excess supply isn't pulling vines. The solution has to be improving demand, but that will take time and will be painful for growers in the interim.

This is a topic that I covered in a recent blog as well as the Annual State of the Industry Report but is too extensive for this post.

The short treatment is there are essentially two things that are needed to improve consumer demand for wine and lower the gulf between that and grape supply:

Please join this site on the top right-hand side of the page, and offer your thoughts below. I respond to everyone.

﻿
Please share this post on your favorite social media platform. We need to heighten the discussion of this topic.