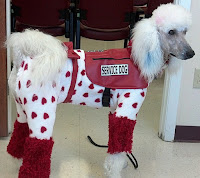 This past weekend I went to Trader Joe's to get supplies for making pizza. When I entered the store, I noticed an old yellow Labrador mix wearing a vest that said "Service Dog," the kind anyone without any proof can buy from Amazon.

Rover was wandering around with a middle-aged woman who outwardly didn't seem disabled in the least. I felt a tinge of guilt with being politically insensitive to even wonder inwardly about the animal's legitimacy, so I just moved on to the pepperoni.

Soon thereafter I noticed a Standard Poodle, also with "Service Dog" emblazoned on his vest and once again, the owner didn't show any outward disability. I'm still not used to the frequency with which I see animals in restaurants, grocery stores and other public places. But again trying to be politically correct, I put the questions out of mind and paid attention to the mozzarella.


Then an interesting thing happened right while I was fondling the pizza dough. The two dogs decided to get into a full-fledged dog fight with snarling, snapping, foaming jowls and biting ...  right there, in middle of Trader Joe's, right between the pizza dough and prosciutto! Right next to the baking potatoes. 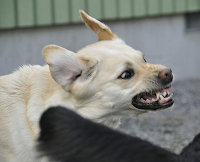 Both owners jerked at their dog's collars and screamed, "NO [insert dog's name here]!" At the same moment one of the dogs yelped and limped away; the clear loser in this month's Trader Joe's Service Dog Battles.

Vegas had the Standard Poodle with a bite over/under at 3. Had I known, I would have put money on the old Lab to kick the poodle's ass, but ... shouldn't there be regulations about this bad behavior?

It reminds me of the current dogfight we have on our hands in the upcoming Napa elections where a ballot measure has an appealing name that would lead a person to believe there is an imminent threat to the County's water supply from agriculture. But just like the vests on the dogs in Trader Joe's, the title of this initiative doesn't reflect the true intent and if passed, most in the County will only discover the real bite after this dog of an initiative is approved.

The proponents of Napa County Measure C are a coalition of individuals who've cleverly worded their proposal as "The Napa County Watershed and Oak Woodlands Protection Initiative." They largely believe the wine business has gone too far in Napa and for different reasons, want to limit the changes from the wine industry, particularly on the hillsides that provide the County's water supply. It sounds dire and if it's that bad, deserves to be understood and regulated.

So which is better? Protecting watersheds and oaks, or protecting agriculture? That's the way the battle is being portrayed in public. Who wouldn't want clean water and hillside forests preserved?

As a life-long naturalist, I know I want to see green hillsides and healthy streams, but that's not the real trade-off in this case. The threat to water supplies in Napa has no real basis in any current study. It's just a threat ... like you can get cramps and drown when swimming too soon after eating.

This initiative for the first time since the 1960's includes language that will with 100% certainty, put an end to any new vineyard development in Napa. And at the same time, it has carve outs that exempt housing development - even in the water shed as defined by the initiative.

Hillside houses in the water shed will require water for landscaping and personal use, septic tanks will be installed and roads will be cut, and new power lines pulled. The initiative should more aptly be called the "2018 Napa Hillside Mansion Initiative." .., and yes I know that's hyperbole, but that's the kind of rhetoric that is coming out with this measure. Would you vote for an initiative with that title? 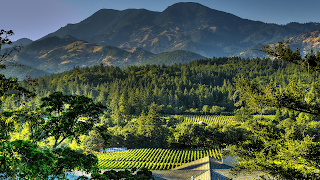 Having lived in Napa for over 20 years and seen Napa's evolution since the 1960's first hand, the biggest change I see on the hillsides isn't from vineyards or wineries. Napa hillsides don't look like - and never will look like Lake Geneva where native species have been pushed out in favor of vines. We have a hillside ordinance that speaks to that issue.

Napa hillsides still are full of fir, redwoods, oak and bay trees because of existing regulations, including giving preference to agriculture as a use over residential development, and several other ordinances that balance environmental concerns over agriculture.

Could Napa hillsides turn into one big vineyard? That's just not possible.

The obvious reality is that if hillsides could be developed for vineyards, at this point they would be, given the demand for Napa cabernet. This regulation won't change that fact. While there is pasture land that is suitable for planting in Carneros, there really isn't very much acreage that can still be planted in Napa Valley proper and in the surrounding hills in particular because of the current regulations.

I try and take a reasoned approach when I comment on wine business politics. I want to understand minority views because there is something useful in finding common ground for all of us, and there is something good to consider here too. We should all want to protect the natural beauty of the Napa Valley.

This debate however has so much misinformation and misdirection from passionate people on either side, that it's really difficult to comment and not get pulled down a rat hole of unending sound bites that don't improve the dialogue. For that reason, for the first time I'm going to turn off the comment section of the blog.

Rather than make that mistake of getting in a dogfight in a public place like my canine friends did in Trader Joe's, I'm simply going to say that I am opposed to Measure C, and if you live in Napa County, I urge you to vote no on this measure too.

There are many places to find information, but here are links to articles and information from others that have been helpful for me in arriving at my conclusion on the topic: