The 2018 Annual SVB Wine Industry Videocast was presented last Wednesday to a record audience both domestically and across the globe. You are welcome to replay and review the session above.

I'm always happy when the videocast is over because it marks the end of 3+ months of writing and research, which is a marathon to begin with considering I have other job responsibilities and the research and report activities push through the Holiday Season. This year though, the process felt like running a half-marathon wearing ankle weights.


SVB runs a Wine Conditions survey to support our report, but we had to cancel it this year because it was scheduled to go out October 12th; three days after the North Coast Fires started. With our offices closed and wineries scrambling in Napa and Sonoma, there was no way we could get the survey done.

That will impact our trending efforts for years ahead of us because we'll have a gap year to deal with, but like everyone else we'll adjust. We will publish the Annual SVB Wine Report February 13th this year which is about 3 weeks later than normal, but hope you all anticipate the release and will read it, and engage in the dialogue of industry adaptation and evolution. 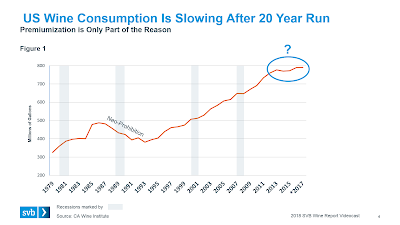 The problem we're facing is a declining growth rate. That doesn't mean sales are lower. It means the growth rates we've been used to are dropping and it shows up in many data points consistently. The above chart is a volume based and you can see the change in consumption demonstrated by the circled part of the trend. Why the change? 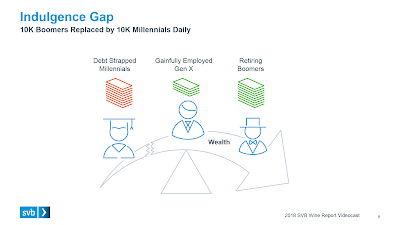 We are dealing with an echo from the Great Recession with the younger consumer's delayed entrance into becoming contributing luxury consumers. They are financially disadvantaged and that has created an Indulgence Gap where they remain focused on needs versus wants, compared to the generations that preceded them.

At the same time, we are also dealing with a retiring boomer that controls most of the net worth and discretionary income in the US. A boomer living on a fixed income will change the way they spend, and as they age they will also drink less wine. The median boomer hits 65 in four years and the decline in spending isn't going to be like a light switch. We are already seeing their changed spending today.

A Part of the Solution:

The reality of the current wine model is it's based in the tasting room and that's too limiting. You are only selling wine to those who can come to the winery. People come to the tasting room. We sign up 6% of them into the wine club. We hold onto them for 30 months, and then we have to replace them.

While this model has been working to replace distributors who have left the small producers, it's an expensive way to sell because of the overhead from added salaries and facilities, and there are signs of the model starting to hit a wall. Fortunately, there are options to consider. 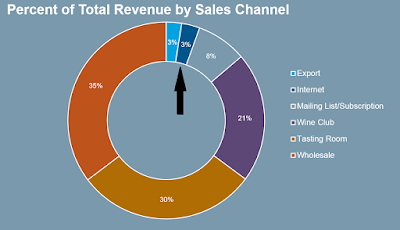 Today only 3% of sales are made through the web. That channel has less overhead applied to it, and it opens the door to all of the other consumers who can't come to your winery. Yes I know all the issues with pointing out the opportunity in internet sales, including - it's not the same experience.

In saying we need to focus on internet direct sales, I'm also suggesting the focus on experience just being at the winery, has to evolve as well. The consumer will have an experience when they interact with you on the web. They are walking into your virtual store. How will they be greeted?

The virtual experience is the next frontier. We need to invest more in digital marketing and make directional improvement in on-line sales. I'm not suggesting ignoring the tasting room though. I'm suggesting your next strategic discussion needs to put greater focus on  an integrated digital marketing plan that drives consumers to your winery AND your website.

I'm suggesting there is a lot of work to do in getting the industry current with retail tactics that are already widely employed, even by the most posh luxury goods producers.