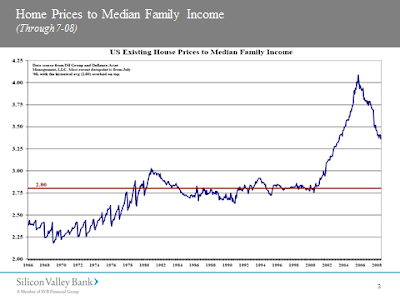 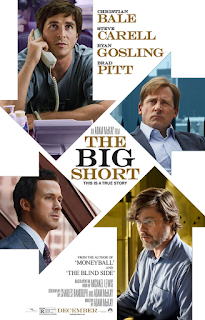 In 2007 I saw the above chart that tracked US home prices versus median family income. With other indicators in the market, I was convinced there was a real estate bubble already in the process of bursting and I started talking about it in speeches. The result of my prescience? I stopped getting speaking invitations and in one speech had the organizer ask if I could be a little more cheery.

People don't want to consider the downside risk in business when things are going well.

If I told you today what you wanted to hear, I would say that wine consumption is growing in both volume and dollars and consumers are continuing to trade up above $9.00. I would tell you that grape prices are at an all-time high and trending higher right along with land prices.

That's true and might get me more important speaking engagements, but I'd rather you know about an underlying trend I'm seeing that's more than a little concerning. If I'm right, it's going to change the way you are thinking about business right now. 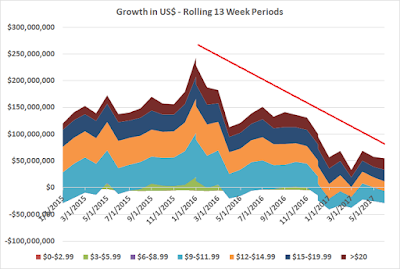 While premiumization is in full force and the wine business is still growing, today we are at a tipping point: The growth rate in premium wine is decelerating and has been since late 2015.

Let me say that in more defined terms: Using Nielsen Scan Data in the chart titled Growth in US$, you can clearly see the rate of growth in wine priced above $9.00 is declining. That's not saying wine sales are declining, but rather the positive growth rate we've seen in premium wine for a very long time is clearly decelerating.

By middle 2018 to the start of 2019, if the trends hold, wine as a category will have zero growth. That doesn't seem right to me intuitively. Isn't everything moving along well in premium markets? On the surface that seems to contradict everything else being written today. Can't I just be a little more cheery? 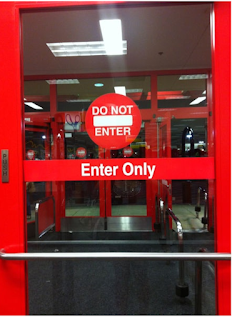 The first thing I do when I see surprising, contradictory or confusing data is understand bias and question the context. It's possible to get bad information from otherwise good research.

Nielsen data are biased to wine sold through wholesale. It excludes some non-traditional channel information like Costco, DtC sales, and some private labels like Aldi and Lidl that don't participate in syndicated data collection. So it's possible the decline isn't a decline at all, but a channel shift Nielsen doesn't pick up. Costco is the largest wine retailer and has close to $2BN of wine sales annually. DtC could also impact the Nielsen trend as there are more than $2BN of sales in that channel too, and sales are clearly growing there.

Looking at public information, Constellation's quarter ending 3/31/17 showed wine sales trended lower by 3.8%, but they attributed that to the divestiture of their Canadian wine business. The sales decline is still an interesting fact because here we're talking about total sales declines in a premium wine company, not just declines in a growth rate. Still, their explanation is plausible.

No matter what, I always have a hard time dismissing obvious trends from Nielsen, so we need to dig a bit deeper. 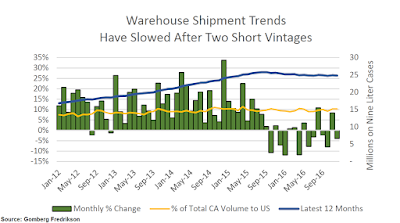 At the present time, trailing data from financial statements we collect don't show any trend. FYE 2016 sales for premium wine companies averaged 9% growth last year; close to the same rate of growth in each of the prior 3 years. But our data are perhaps too much of a lag on the current market indicators to be meaningful in this case.

Gomberg-Fredrickson data from year-end in the chart above give a slightly different view. They are showing shipments from warehouses have slowed, roughly equivalent to what Nielsen is showing in the time line. GF data does include DtC and Costco shipments. But as noted in the chart heading, the shipment declines were attributed to short vintages; a secular change that arguably would reverse if there were more supply. Is it secular? 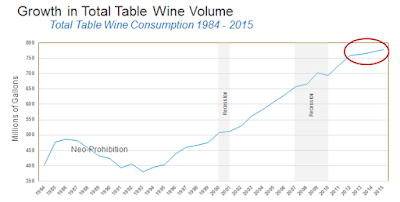 In the State of the Industry Report last year, I predicted a decline in per-capita consumption. This year I had to acknowledge I was close but still wrong in that call. There was a decline in the slope of the growth rate trend of sales by volume, as noted in the chart above. That's been the case for a few years now. But per-capita consumption of wine is still positive.

No matter, it's important to note that this chart is once again consistent with the Nielsen data that's showing consumption trend slowing, at least by volume in this case.


There are so many more directions I've been going trying to track down a clear view on the market trends and impact.

My sense at this point is there is change afoot, so I've spent a fair bit of time speaking to other people in the Beverage-Alcohol industry who I respect. Interestingly, all of them reported seeing the same thing, but through a different lens:


What's Does It All Mean?


I'm not done with my research - and I really do want to be more cheery but my early conclusion is we are at the start of a long term secular market change, meaning what's ahead is something we all have to embed in our planning, because it will impact grape prices, land prices, wine sales, and the current M&A market, even success in general at some point. But what's the trigger that's behind these observations?

I have an explanation that ties all this together, but it's going to take too long in a blog to lay that out today. I'll do that in a separate post when I can get a few hours free.

For now, I'm really curious what you are seeing in the business and hoping you will add to the discussion so ....