Picking A Side In the Napa Winery Fight 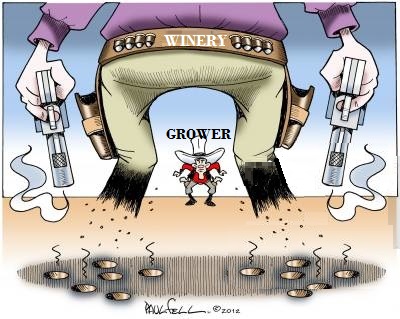 No it's not Monday when I normally post. I got inspired midweek from Tom Wark who wrote a piece yesterday in his Fermentation Daily Wine Blog entitled Critics of the Napa Valley Wine Industry are Losing Badly. It's a passionate opinion piece of the goings-on in Napa County politics which are overheated with rhetoric. (Rhetoric | rhet·o·ric \ˈre-tə-rik\: language that is intended to influence people and that may not be honest or reasonable.)

If you live and work in Napa County as I do, you see endless reports in the local papers of various people and organizations wanting to have their grapes and eat them too: meaning they love the money tourism brings to their valley to pay for services, they love looking at vines, they love the economic vitality of a growth business, and they particularly love their home values rising. But they also don't want the existing wine industry to expand, nor do they want new wineries or tourists.

The anti-winery discussion in the North Coast has thus far included a cartoon-like mix of NIMBYs, some growers and anti-change groups, each fanning the flames of public debate but for a variety of different end goals. These kinds of coalitions always end up deteriorating or creating the proverbial camel that was the horse designed by a committee. It's the nature of a coalition without a shared vision.

Here are some linked examples of the debate. Click on the articles and check out comments in the articles at the bottom They are like watching a B rated reality TV series with a train wreck for a backdrop: 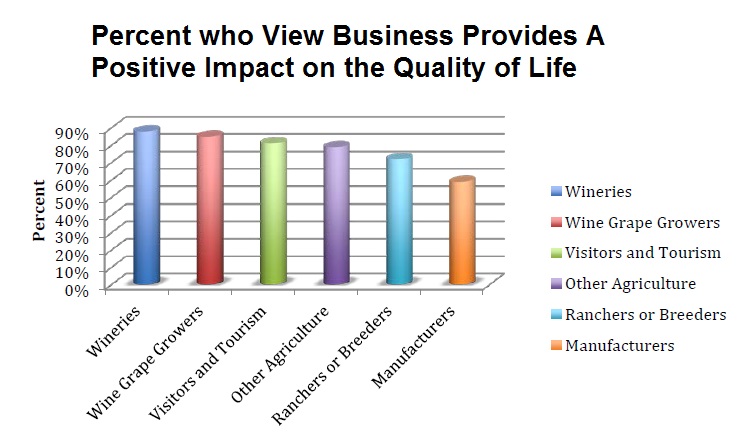 In August of this year, Sonoma State University shed a little light on the subject when they ran their own survey of locals to get a view on just how the community really felt about the wine business. That work was picked up in the Santa Rosa Press Democrat and published in a piece titled: Sonoma State survey finds wide support for North Coast wine industry.

I was actually a little surprised by the results of the survey which can be seen in the above chart. It found that 88% of locals felt the Wine Business had a positive impact on the quality of life in their county. Wait! I thought John Q Public had the opposite view? Apparently not but wait, there's more: 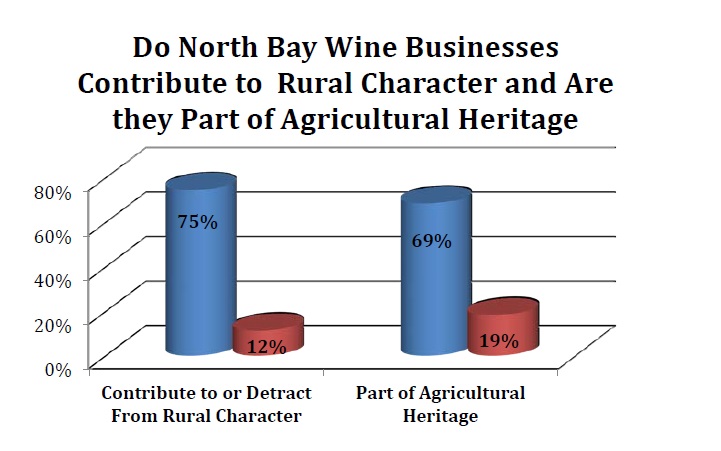 The chart that I found the most interesting was this one to the right, that shows the overwhelming majority of people in the Napa/Sonoma region felt the Wine Business both contributed positively to the rural character, and was considered part of the agricultural heritage of the region. That's not really the message that is being portrayed.

As I mentioned straight off, the narrative that is being put forth by the naysayers with all the rhetoric surrounding the wine business would lead one to believe the chart from SSU might look flipped on it's head, but locals said otherwise.

What about the wine business itself? Does the industry buy what is being put forth? Turns out, I have a chart for that too: 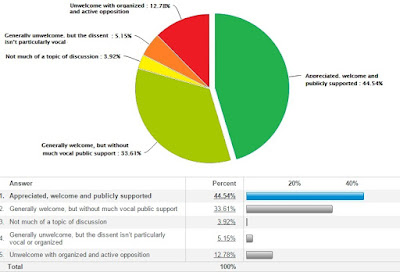 We asked wineries to rate how they felt their communities felt about them, rating their beliefs on a scale from being vocally opposed on one end, up to being publicly supported on the other.

To the left is that chart which is part of the Annual Wine Conditions Survey (..... the survey is still open until Thursday night for late wineries who haven't participated yet [survey link].)

As of this moment 78% said they felt they were welcomed in their communities. These results are amazingly close to the results found in the Sonoma State University survey.

So back to Tom Warks post from the other day, "Critics of the Napa Valley Wine Industry are Losing Badly" ..... I would have to conclude locals and the wine business are aligned in their views and yes, the anti-winery messaging isn't really impacting beliefs in their communities as many might suppose.

Does that prove there is nothing for wineries and vineyards to do? Hardly.

I've had discussions with County Officials to hear their perspectives on the matter and at least some feel caught in a squeeze without much vocal support from the wine or grower side of the industry. The result of inaction is demonstrated in Napa and Sonoma County which are almost in a defacto freeze trying to get requested changes to permits. Virtually no new wineries are getting approved.

One of the consequences of the stalled permit process strangely is that contractors who have made a living on retrofitting and building new wineries are telling me the only building they have on their schedules for 2016 are gigantic luxury homes on the hillsides. That's the real oddity in this debate:

While you can stop a vineyard from being built by making it too expensive with EIRs and remediation, Constitutionally you can't stop a property owner from building a home on a legal parcel. So .... while we dabate whether a new winery should have 40 or 60 visitors a week, hospital sized homes are popping up left and right in the Napa and Sonoma hillsides like a chocolate chip cookie. But at least there are no vineyards being put in.

A Seat or a Side 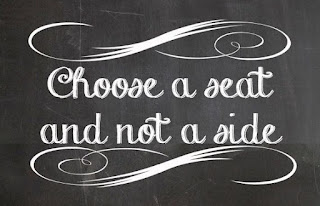 So which side are you on? I am taking a seat on the side that protects the Valleys from wanton growth, deforestation of the hillsides, unfettered growth in new wineries, ruination of streams and habitat, and the destruction of the nature and character of the regions in which we live. We don't need every winery approved without planning for infrastructure. Surprised with that? Why be surprised? Shouldn't we all want to protect the resource that allows us to produce and sell our product?

That said, I am also on the side that wants to get clear information about the issues instead of spewing rhetoric spawning popular myths. Take for instance traffic problems ( .... its job growth more than tourism by the way). Once the reason is researched and properly supported with facts, I'll side with people to develop solutions to improve traffic flow. Two ideas: opening and closing tasting rooms at different times and incenting non-hospitality workers to work in towns instead of commuting to agricultural areas. Those ideas don't come out if the problem is defined simply as winery growth.

That’s not where we are though. We continue to allow false branding of the problems. This is going to cost us all in the final analysis without officials willing to ask tough and sensible questions, and winery owners willing to more consistently add their reasoned voice to the public dialogue.

## Annual Wine Survey ... the place where we get some of our industry information like the above is and Annual Wine Condition Survey. That closes Thursday night. About 500 have responded so far but if your winery hasn't yet participated, please do so. It will take about 12 minutes.

Please comment and join this site at the top right of this page for updates and new posts.

Sign in and offer your perspectives for the benefit of the community.

If you think this information and discussion is valuable, please share this post on your favorite social media platform.