Doesn't Everyone Hate The Wine Business?


While Napa is the current poster child for the debate, whether Sonoma, Santa Barbara, Oregon, Virginia, Paso Robles, or the San Joaquin Valley - the wine business has received it's share of public scrutiny the past few years in local press. While "wine country" is viewed by many as an idyllic place to live or retire .... certainly so if you read listings from local real estate agents, that view isn't shared by a non-homogenous mix of anti-winery folks in what is now being labeled in an on-going story of the greedy and detached winery owners and growers versus their communities.

I wrote about this issue about a year ago [link] and the debate has continued to develop since. Recent headlines include: 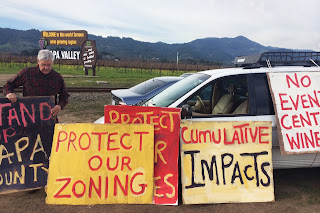 According to the articles and comments from readers in newspapers who cover the business, the debate is about a threat that is changing the character of [fill in your town or AVA here]. Those accusations are back-stopped with references to the negative impacts from traffic, noise, tourism and heavier water use.

Here is the reality: With only limited exception - there is no research available that supports the claims and the cited adverse impacts as purported. But it really doesn't matter because if something is said long enough without being challenged, then the perception becomes true. Today the industry isn't doing enough to survey, research and then counter the anti-wine accusations with facts.


Comments from readers in some of these stories are scathing, some are irrational gibberish, but there are very few comments defending the business or offering a supported counter view. "The wineries are ruining our [fill in the blank: open space, quality of life, agricultural heritage, view, agricultural diversity, rural character]." Motivation for these views are varied but include good old-fashioned NIMBYism, run of the mill anti-change agendas, and sadly in some cases, vintner grape-grower infighting. 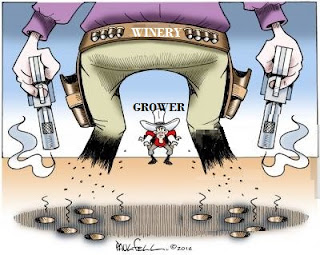 The later, from my perspective is about as smart as a pro-sports league going on strike, reaching out to fans for sympathy, and then expecting they will side with billionaires. That action paints the business in a very unappealing light.

Growers and wineries can argue over contract terms, farming practices, and disagree over fair compensation, but taking this evolving debate into the public and siding with an anti-wine coalition or providing fuel to the argument is asinine. [... there. I said it.]

Everyone Loves the Wine Business 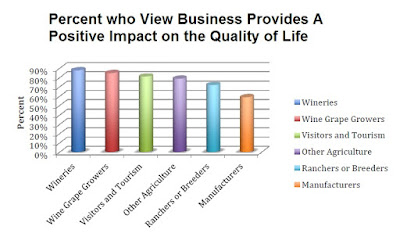 I've wondered about the degree to which the public's feelings are being represented by these vocal antagonists. They have certainly gotten their share of ink.

Then this past Friday, Bill Swindell wrote this piece in the Santa Rosa Press Democrat titled "Sonoma State survey finds wide support for North Coast wine industry." We have our answer: It turns out, there is wide local support for the wine industry! To paraphrase Sally Fields: You like us! You really like us!!

Wait! I thought John Q Public had the opposite view? Apparently not, and there's more:
Here is the stake in the heart for the anti-winery group who believe they represent their communities feelings on this issue. 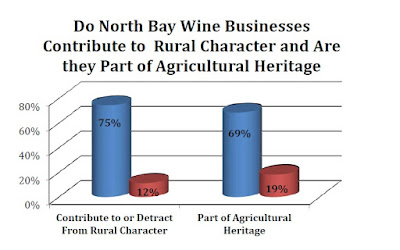 From this one chart we now can conclude the overwhelming majority of North Coast locals believe wineries contribute positively to preserving the rural character and agricultural heritage of their regions.

Strike Up The Band!


Before anyone starts a parade, there are two thoughts that need to be brought out:

First, the anti-winery group - while at times inflammatory, still have many points in their plank that should be considered. Second, the wine business is in part to blame for the negative directional image change that has been gaining momentum these past several years.

Anti-Winery Side Has Good Points

I am old enough to remember Silicon Valley when IBM and Fairchild Semiconductor cohabitated side by side with fruit trees in what was pretty good farm land, before it was paved over.

I think there are a couple cherry orchards left in Cupertino but today the biggest fruit grown in Silicon Valley is the new Apple Campus under construction. In many counties that's not the desired outcome of residents.

Rural character and agriculture is something that is protected in places, but should food processors and wineries be viewed as agriculture? How do you handle a person who builds a home next to a garlic producer, then complains about the smell? Many say that wineries are no more a part of agriculture than garlic packing and tomato warehouses. How many wineries are enough? When does the next incremental winery make a community worse off? These are valid questions to ask and sorting them out benefits everyone. 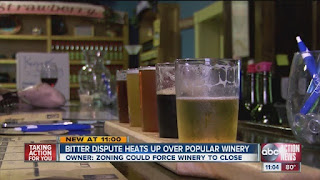 The apocalyptic vision of wine communities is what is being debated. Taken to an endpoint, we all can lose what makes wine country worth visiting, and instead end up with unabated winery development, uncontrolled wine production, deforestation of the hillsides and open space to accommodate new vineyards, more hotels, more events, more expensive restaurants, fewer local serving businesses, traffic, noise pollution, cats and dogs having sex, and the list goes on.

Does anyone in the wine business really want their region to become institutionalized, leaving wine tourism routes resembling strip malls with the only difference a few rows of vines separating wineries instead of grass median strips?

The protagonists in our story - the evil wineries and vineyard owners, should all want to maintain the beauty that makes tourists want to come to visit and buy their products.

Both sides in the debate should largely want the same thing: A wine growing region that demonstrates architectural diversity and retains and enhances the natural beauty of an area, as well as considers and mitigates negative impacts from vineyard and winery operations. That's why we should all want to see county zoning and ordinances that limit vineyard and winery development, but refrain from handcuffing wineries who want to bring new architectural diversity to the mix.

On that last point, I would love to see independent studies done to quantify the claims of negative impacts on traffic, water, and noise in various communities due to the wine business. I don't doubt they exist, but before we start solving a problem, shouldn't that first be defined so when we write regulations, the regulations help solve the issue?

If we don't study the problems rationally and develop regulations on mere perceptions, the wine business will be negatively branded and we will have restrictions that don't solve the real issues.

If you listen to the detractors, they are promoting their causes and branding the wine business as something resembling a cross between Disneyland, Love Canal, and Los Angeles during rush hour. Winery owners shouldn't be surprised to find people with opposing views showing up to planning commission meetings, ready to challenge every new change to a winery permit and turning the debate into a type of Spanish Inquisition that is then picked up in the local press.

They have banded together, put up websites explaining their perspective, protested and picketed, used letters to the editors to publish their view, shown up at planning commission meetings where papers are looking for controversy to write about. They have demanded change, and they have been getting it.

The Cure for the Spanish Inquisition: Education.


Allowing someone else to shape the debate without contesting the accusations is a mistake. Where is the research that is done to substantiate allegations? 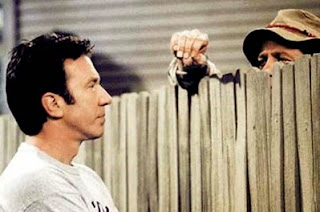 Appellation Associations typically view themselves as a marketing arm for the promotion and sale of wine produced. While some provide input into the County on issues when asked, I don't believe a single AVA Association takes it as their first responsibility to promote and market their constituency to the public at large within their county. And yet the current anti mono-culture anti-winery debate is perhaps the largest threat facing the small wine business today.

Rather than let others define the issues, the wine business needs to be better at branding themselves locally and educating communities on what is happening, as well as the positive ways the business impacts the community.

Traffic in Napa for instance is more due to job creation than tourism according to a study done by the County but that isn't widely believed. There are human stories out there about the positive ways the wine business gives back to their communities. While one can say vineyards are ruining a region's habitat, the donation by wineries to open space and permanent development easements is really unprecedented in business. And for wineries specifically, what are you doing to foster positive relations with immediate neighbors? Those folks can be your greatest ally the next time you want an increase in your use permit.

What Do You Think about this Topic?

Please join the site in the upper right hand of the page and offer your own thoughts for the benefit of the wine community.  If you think the discussion is worthwhile, please promote this on your favorite social media platform.