How Much Value is there in Wine Tourism?

Many in business view another competitor moving into your territory as an affront to all that is fair and decent. Its the moral equivalent of "I was here first." Sometimes that kind of in-your-face competition is truly a net sum zero game. For example, there was a small drive-thru coffee station in the shopping center I frequent, but one day Peat's Coffee moved in. They survived about a year but now the drive-thru is closed. There are plenty of examples just like that but other times, competitors and related businesses cooperating together can have a positive impact on business conditions and instead of waring, can come together and win together.

The More the Merrier

Economically, there is a concept called an Agglomeration Effect that offers different insight to localized competition. For example, think of a store in the middle of nowhere. Who will drive to that single store? Now build a huge mall right next to that store and what happens? Lots of people go to the mall. That is the kind of advantage wineries can find when they cooperate and develop urban wineries and wine trails. Once those businesses are concentrated, then wine tourism can be promoted as a powerful tool to enhance business for everyone in the area and focus marketing on the high-spending foodies who are looking for ways to give away their money to restaurants, hotels and wineries.

Clay Gregory, CEO of Visit Napa Valley told me this past week there will be a study released at month end in concert with the completed Economic Impact of Tourism on Napa County. It was done by Destination Analysts, a research firm in SF. The study was conducted over the full year of 2012 and included both surveys of lodging guests and intercept studies at 15 Napa Valley locations to gain additional data from day trippers and folks staying over night with friends or relatives.  It also included surveys of meeting planners for insight into group business and leisure travel. Clay was kind enough to give me an early preview on a couple data points from the study:
Those are impressive stats and when the report is released, no doubt we will read about the impressive economic impact. The bottom line is no matter where your winery is, you need to allocate some of your copious free time to support the growth and success of winetourism in your region.

In a still recovering business climate, there seems more cooperation between chambers, counties, wine associations, hotels, restaurant associations, tourism bureaus, states and governments than ever, but there are still competing interests that push back at the foundations of those efforts.

One would think a place like St Helena in the Napa Valley would be a prime place for an aligned emphasis on wine tourism, but there are competing interests between those wanting "local serving" businesses (eg - we're here now so close the gate so there's no more change), and entrepreneurs seeing business opportunity. Case in point is the Napa Valley Wine Train which goes from the south end of Napa County to St Helena in the north, conveying dining tourists up to the heart of wine country from the City of Napa. What do those free spending tourists do when they get to St Helena? They turn around and go back. The City wont let them get off the train - ostensibly because there isn't sufficient water to flush toilets (Yes ... its a little more complex but that's the shortcut). One would think in a tourist clogged artery like Highway 29, adding rail service might be a welcome and green thing to do versus the long line of cars speeding along at 3 miles an hour. One might think that but one would be wrong. Enivitably that story will continue to have additional chapters added as the objective and benefits are too obvious. All that said, Napa is moving forward in promoting wine tourism, bookmarked by the 2010 adoption of the Napa Valley Tourism Improvment District and passage of an increase in an occupancy tax.

It wasn't that many years ago a fierce fight was being waged about the addition of a hotel to the Willamette Valley between pro-wine tourism advocates and a green opposition  (eg - we're here now close the gate so there's no more change.) Since there are few Willamette hotels, one would think allowing one would be a no-brainer but that wasn't the case. If you wanted to do the wine thing, you were more inclined to hang in Portland and drive the 90 minutes or so to wine country.

For me the first thing I remember about Oregon was the sign at the California boarder during the days of Governor Tom McCall which read: "Welcome to Oregon. We hope you enjoy your visit." The underline was part of the sign too. The feeling was Californian's were driving up the price of land and making housing unaffordable. A real anti-visitor bias firmly took hold.


Oregonians are probably second only to Texans in believing they are their own country. But the The Republic of Oregon is evolving away from  being isolationists. While I'm not expecting them to really join the Union or fall in love with Californians, they are more than just the first three letters in Ore-Ida potatoes now with more than 2,000,000 cases of wine being produced. Oregon wine has truly arrived on the National scene and more and more wine lovers are favoring that regions products. 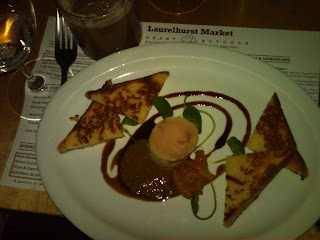 As a final and personal note, if you haven't been to Oregon to visit their grape growing regions lately, do yourself a favor and go this summer. Spend some time in Portland because while the Republic of Oregon isn't going to really join the Union which may seem a little backward, the State of California decided to outlaw the sale of foie gras and leave the rest of civilized culture. So if you favor that delicacy, you wont legally find it in California. Beyond that trifling nuisance, the restaurant scene in Oregon is really stunning with local produce, a green orientation, good prices and world class Oregon Wines many of which can only be found there. (See picture of Laurelhurst Market foie gras. The glass is a burbon cocktail made at the restaurant with smoke flavored ice which I thought was a really cool idea and pairing for a restaurant focused on serving meat.)

If you are interested in learning more about Wine Tourism, the Third Annual Wine Tourism Conference is being held in Portland Oregon November 13th - 15th.

If you have thoughts about wine tourism (or foie gras) feel free to log in and contribute to the discussion.