Wine & Milk in Decline Due to Changing Science

I was intrigued at the above video which chronicles the advent and popularity of plant-based milk products like Almond Milk and at the same time the decline in the consumption of real milk. Milk and wine were both described as a healthy part of a normal diet at one point. So what happened? It's a little bit of Deja Vu.

What Do Milk and Wine Have in Common? 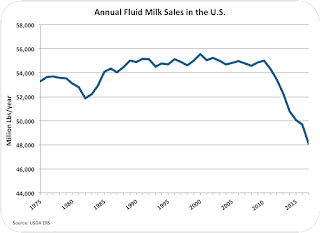 It's hard to believe that milk, which was once viewed as critical for strong teeth and bones and mandated in school programs by the National School Lunch Act in 1946, has now reached the point where it's become unnecessary, if not outright unhealthy.

Today the total volume of all types of milk sold, the price of milk, and the number of dairies are all in decline because of various negative scientific studies. That's not what I envision or hope for the wine industry.

So how did milk's star fall over the past 75 years and more recently, how did soy, rice, coconut, almond, and oat milk become such strong and growing substitutes? The CBS program in the lead video notes how the plant-based milk craze started. It all started with our changed view of fat. 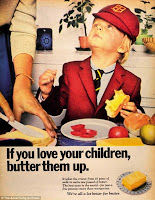 Fat started to become a negative thing to the consumer in the 70s when new studies focused on "healthy calories" and animal fats. That took on greater weight when popular consensus consolidated around two studies in the late 1980s that identified dietary fat as the single largest factor contributing to obesity-related health issues.

Fat, just like alcohol today was at one-time cast as the villain with respect to health outcomes. Was it accurate?

While that view turned out to be flawed inevitably, the account caught on in the press and drove people to consume more lean meats like chicken and fish, eat margarine instead of butter, limit the consumption of cheese, and seek out low and fat-free foods.

The dairy industry adapted. If fat is bad for you, let's sell more "skim milk" but change the name to "fat-free" milk and emphasize the evolving consumer trend away from fat. That was followed by extensions in low-fat milk, low-fat yogurt, ice cream, and cottage cheese. 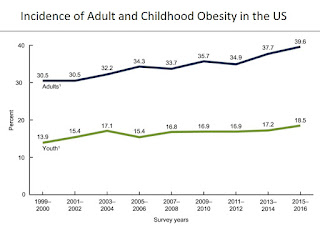 The milk industry didn't just roll over and agree on negative science. It mobilized industry associations both domestically and internationally and pushed back on the validity of the negative science of the age, funded new research and they advertised, including the popular Got Milk celebrity campaign.

At the same time, the broader food industry jumped on the consumer trend by creating fat-free cheese and different varieties of processed snacks and convenience foods, using hydrogenated vegetable fat instead of animal fat and using more sugar in the formulas.

And what was the result of all that science that ran down the health impact of eggs, red meat, cereal, wine, and milk? Today we have the highest level of obesity - EVER as noted in nearby chart.

And in an irony that underscores the fallacy in the manner in which consensus and truth in science evolve, studies now indicate that butterfat is an invaluable component for certain body functions. Butter is once again good for you. Not margarine. But even more, today the current science suggests that eating less saturated fat DOES NOT lower a person's risk for coronary heart disease! Those emerging scientific facts drove whole milk sales higher over the last two years.

Consider how quickly the impact of positive health information contributed to the consumer changing back to real fatty butter and whole milk.

Plant-based milk has flourished of late, taking share from real milk because of notions of health and sustainability. Many believe that cow and cattle operations add materially to greenhouse gases and that methane is a major contributor to global warming. Add to that studies that focused on hidden sugars in breakfast cereals along with greater awareness of lactose intolerance, and the result is that total milk sales today are falling by the billions annually. 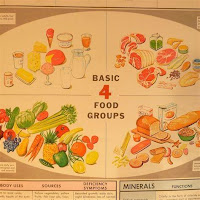 Red meat has also gone through a similar swing as milk. Once too a necessary ingredient in the USDA Four Food Groups, it now suffers from scientific reports that link red meat to some cancers.

The combination of sustainability and the lingering questions about the value of red meat in a healthy diet lead many people to make the personal choice to move away from meat and adopt more plant-based diets including plant-based 'milk.' That seems to be the current health craze.

Interestingly, as the above video notes, much of the plant-based milk has additives, trace chemicals from processing, sugars, stabilizers, and even hydrogenated fat. It's processed food and the science isn't in on the health benefits and risks yet, but the tale that comes through today is plant-based milk is healthy and sales are soaring.

The story of milk's decline reminds me of wine, which has gone from being part of a healthy lifestyle under USDA guidelines to now being viewed as unhealthy and like red meat, linked to very slight increases in some cancers in studies.

How Did Wine Become Unhealthy? 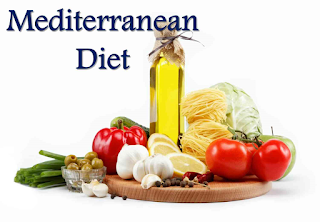 In much the same way as milk and red meat lost demand with the consumer, wine is losing today in the popular narrative because of negative studies that often start with an agenda to reduce consumption.

At one point in the 90s and early 2000s, science and the public narrative had wine as a HEALTHY component of life, possessing a positive impact on coronary heart disease and stroke.

The French Paradox, the Mediterranean Diet, and the work of Arthur Klatsky, MD who proved that moderate alcohol consumption led to better health outcomes compared to abstainers and abusers, all contributed to a positive health view of wine for the consumer and sales soared starting in the middle nineties.

Since then the anti-alcohol movement, caught behind in the battle for minds, has waged a consistent and progressive battle to rewrite the story. While the wine business has focused on peripheral skirmishes and lavished in strong consumer demand, the neo-prohibitionists and their paid research tried to 'explain' the French Paradox [link], rewrite Arthur Klatsky's work [link], and go on the offensive by funding studies to try and link cancer and wine. [link] They have been successful. 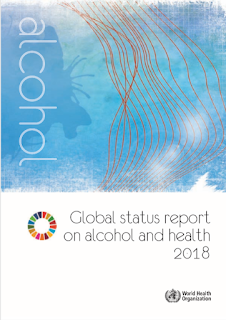 Then in February 2011, the World Health Organization which was emboldened with scientific momentum, met to plot strategy to "reduce the harmful effects of alcohol."

Left alone, that statement would have found agreement even from alcohol producers. We all recognize the negative effects of alcohol abuse and all want to limit those harmful effects. But reducing harmful effects wasn't the outcome and perhaps was never the purpose.

Instead, the WHO has worked at reducing TOTAL alcohol consumption, starting by attributing everything imaginable to alcohol, from venereal disease and hepatitis to mental illness.

After demonization, they then drafted policies such as calling for higher taxes, requiring labels to be placed on wine reflecting the WHO cancer findings, and "enacting and enforcing bans or comprehensive restrictions on exposure to alcohol advertising across multiple types of media, and enacting and enforcing restrictions on the physical availability of retailed alcohol." (Global Status Report 2018, p 15) 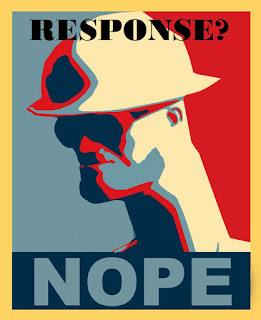 How has the wine industry responded to the overt threat that is leading to declining growth rates?

Like milk that went non-fat, the wine business is working on developing lower alcohol and non-alcohol offerings … and that's it so far. Advertising like the Got Milk campaign? Nope. What about the wine industry organizing to combat the paid science? Nope. Nothing but silence from our industry so far.

Just like the food industry created processed food alternatives, the alcohol beverage industry is coming up with many alternatives such as spiked seltzer, and the non-alcohol industry is feeding other trends with sports and health beverages that both take share away from wine.

The wine industry is content thus far to talk about hospitality, the user experience, long days and cool nights, and how special our soils are. Maybe that's enough?

Please join this site on the top right-hand side of the page, and offer your thoughts below. I respond to everyone.
﻿
Please share this post on your favorite social media platform.