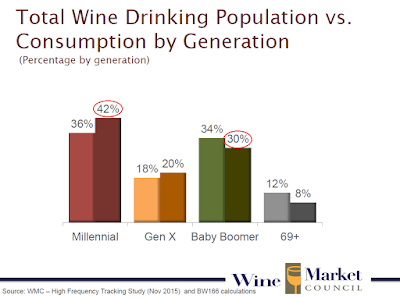 WMC: "Millennials Consume 42% of all wine in America"

The Wine Market Council presented their annual 2016 roadshow in New York in January, and using the above slide announced with fanfare that Millennials are now the largest wine drinking population in America, consuming 42% of all wine and surpassing the boomers with 30% of total consumption. They also said Millennials were consuming 160 million cases compared to 114 million cases consumed for boomers (below right chart).

To many of us in the business the facts appeared grossly exaggerated, but the media ran with the story because it was such a senstational headline. The long-awaited ascendance of the millennial had finally come we were told, and the articles proclaiming the fact hit the wires in waves:

WMC: "Millennials and Boomers Consume the Same Amount of Wine."

Inexplicably, six weeks later at their Yountville presentation, devoid of any supporting facts or charts, the WMC offered the following totally contradictory statement in their presentation:

So which statement should we believe? Are millennials the largest consuming cohort, or are they equal to boomers in consumption? The answer is: Nobody knows.

Rather than retracting the earlier results released in NY in January and providing some clarity, the WMC unbelievably just published different findings and removed the other slides in question. I don't know why they have taken this path. Maybe they were hoping nobody would notice their gaffe and they could just continue on?

Sadly that is the case as of this moment. Nobody noticed the mistake, but the consequences will be felt by the industry the WMC serves because to this day we are still seeing articles published referencing the earlier incorrect findings:

Why Does it Matter if the Data are a Little Off?

It matters because the data appear off by a magnitude of twice that of other available research as explained in the next section. 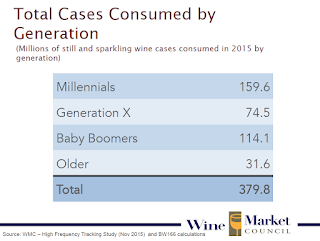 It matters because you can hear and see Tom Steffanci, president of Deutch Family Wine & Spirits reciting the bogus WMC consumption facts as support for his current strategy in this video (link). I don't know him, but I think Tom would care deeply about being put in the position of reciting bad information to the press.

It matters because two weeks ago a prospect presented a deck to me and wanted me to opine on his strategy for a product. He was targeting millennials and had raised millions of dollars from others leaning on the fact from the WMC that 42% of wine consumption is now from millennials. I doubt the investors in this case would be too happy reading this post.

Reality: Millennials Average About 15% of Consumption, Not 42%


We can debate the facts about millennial consumption. Nobody has perfect research, but what I can verify from all the other sources of credible research I've discovered is current millennial consumption falls somewhere between 10% - 20% of total; on average about 15% if you take an average of the other available research. While that's a wide range of results, the forty-two percent figure the WMC presented is more than twice the highest finding I can locate in any other research. and 3x higher than the average. Shouldn't that in itself pose a question to the WMC?

What about the re-engineered consumption statement made in Yountville that positioned boomers and millennials with "nearly the same consumption?" Where did that revised fact come from? I can't find any other research that places millennials and boomers with equal consumption. And in this case, incredibly, the WMC itself hasn't issued any numerical facts supporting their own follow-up conclusion.


To be thorough, it should be noted the Board did notice the problem and there was restatement of one finding in Yountville.

It was noted during the presentation that there had been a "healthy internal debate" within the WMC Board of Directors regarding the New York findings. But specifically which findings were being debated wasn't disclosed to those attending. The only slide corrected was the one to the left.

The information presented in New York was wrong. The WMC changed their conclusion so that fact isn't debatable, but now we are left guessing which findings are right and which are incorrect.

Instead of being transparent about the problems, the WMC elected to simply remove the first slide at the top of the page from the deck. No mention was made of that. That slide and the Total Case Consumed slides just disappeared from the Yountville presentation without comment.

More Questions Now than Before


The inability to support the new total consumption claims with any follow-on hard facts, and the lack of transparency into research practices leaves more questions unanswered now than before:

What do you think?