Have you ever found yourself disbelieving your own eyes or being flabbergasted at a decision that defies logic? For instance, what would happen if you sold all of your wine for less than it cost to produce? Or how about making legislation that made the possession of cigarettes illegal? What would you say if someone told you they wanted to try and change WallMart into Nordstrom? Those are all placeholders for a discussion on business strategies and odd news from last week.

Up in Oregon last week, Representative Mitch Greenlick decided to introduce a bill that would make possession of cigarette's illegal. How stupid is that? Yes I know smoking is stupid too, but if Prohibition proved anything, its that kind of law aimed at limiting consumption of perceived nefarious substances only encourages underground distribution of said substances, which in the end leads to new laws protecting the formerly felonious distributors. Business is replete with countless examples of crazy strategy, such as the $300 million venture capital start-up Pets.com. The founders started the company under the premise they would build market share by discounting their goods, and once their base was established, cut back on the discounting. There was never any validation of the market done and the company was unable to survive because they were selling their goods for much less than it cost to buy them. What happened to buy low and sell high? Asked how they would dig their way out of the problem, their answer was they need to increase sales. Hmmmmm. How crazy is that?

Flash site Lot18 last week announced that it was going to be the marketing agents for TastingRoom.com which closed its own doors on its retail business. Lot18 is another venture backed start up, but in this case a wine retailer that focused on selling discounted wines. I covered the Lot18 UK closure in a prior SVB on Wine post and have for several years questioned the viability of wine flash sites in speeches and the SVB Annual State of the Wine Industry Report.

To be successful wine flash sites have to get producers to sell wine at a significant discount and that would only happen in a market that was oversupplied on wine. I am disbelieving of the long term survival of any business built on a strategy founded on temporary market conditions. Sure a sales strategy can evolve but its really hard to evolve a business that sells only on price, into a real moderated retail experience where the consumer is shopping for the product attributes beyond price. Think about WalMarts departure from their strategy of being the price leader a couple years back. Did they ever have a chance to become something more than a price leader? Lot18 has now moved away from the discounting strategy and is trying to incorporate retail strategies other than price discounts, which is why I was so intrigued by the acquisition of TastingRoom.com.

The TastingRoom.com business itself was founded by a serial entrepreneur with the strategy of creating small samples from full bottles which could then be used for numerous purposes. Personally, I loved that idea because it created a solution for on-line consumers to try an expensive wine without needing to buy an entire bottle. It was a way to bring the tasting room to the customer, hence the name. According to Lew Purdue on Wine Industry Insight, the downfall of the business might have been leaving the initial business model and getting into selling standard format wines. If so that would have been a disappointing path for them to take as they left the clean air of their unique product, and delved into a part of the business that has plenty of competitors and compressed margins.

I'm hoping the combination of Lot18 and and TastingRoom.com turns out well because I had high hopes for both of these companies when they started. They are needed parts of the 5th Column of wine sales, but I can't help but wonder if its not a case of two non-swimmers meeting in the middle of a lake. Hopefully this acquisition/marketing agreement turns out to be brilliant! 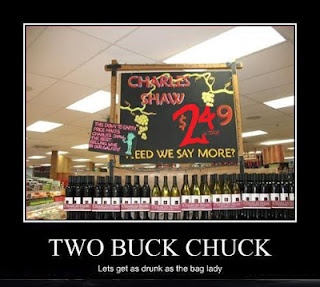 Another business that has received its share of questions regarding it's business model is Charles Shaw aka Two Buck Chuck. In a stroke of marketing genius, Charles legally changed his nick name into Two Forty-Nine Chuck, honoring the San Francisco Forty Niners; the winners of SuperBowl XLVII. But I still wonder if there is more to that story.......

The price increase of Two Buck Chuck to $2.49 was the first broad price increase since inception. You have to ask why? Is it because Chuck Shaw has been blinded by his celebrity and is going upscale on us? I don't think so.

When the brand was founded by Fred Franzia in 2002, he was quoted saying, "Only suckers pay more than $10.00 for a good bottle of wine," and he convinced Trader Joe's to sell the Charles Shaw label for $1.99 thus garnering the brand the nick name Two Buck Chuck and creating the Super Value Segment. Many at the time opined that it wasn't a segment at all, but more reflective of the bulge in bulk wine created from the Tech Bubble and the tragedy of 9-11. Certainly once the bulge was gone, the label would disappear like so many negociant brands before. But it didn't. Today calling the brand a success after 600 million bottles sold would be a massive exercise in understatement.

Back in 2002 I remember hearing about a sizable quantity of Napa Cabernet that was sold to Franzia, and that Fred was starting a new label for $2.00. That seemed crazy to me. Shortly thereafter I was invited to a neighbors home where they poured me a glass of wine and once consumed, I accepted a second pour and then saw the Charles Shaw label for the first time. I chuckled to myself because the wine was good. How could he sell that kind of wine for $1.99. A few months later I tried the wine again and for me, it was not drinkable at all.

How does all this tie together? Wine availability. Lot18 has changed their model because they had to. They can't get the same quality bottled wine as 2 years ago and be successful in a discounting model. To think wine flash sites can have a long term strategy selling only on price to me is crazy. Fred Franzia's people are the best in the business locating and manipulating wine. If they can't find wine at a price that can retail profitably for $2.00 a bottle, then the wine doesn't exist.

While Fred has his detractors and he's had a string of litigation surrounding his business practices over the years, there is nobody I know who calls him crazy. What it says to me is as the wine business evolves into shortages, there is still opportunity to find successful strategies. It also reinforces that a long view of business strategy is critical for success. Some can see that and some can't.
Posted by Rob McMillan at 5:17 PM