What Does the Wine Business Fear Most? 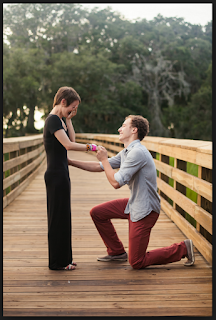 With the New Year's Resolutions on our minds, one related question someone inevitably brings up is "do-overs." If you had a chance to do anything over, what would that be?

I have more than my fair share but I'll throw out one. It's the story of the young lady who agreed to marry me when I was 21 and she was 18. I thought she was a real keeper and we were in love. She said yes! I was so excited until my brand new fiancé said I had to ask her father and then reality started to set in. What if he said no? 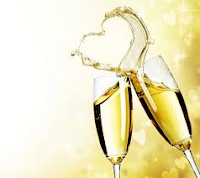 In the evening, I took a bottle of sparkling wine to her home and with my knees shaking, got up the nerve to ask her dad, "Mr Lexon, I'd like to ask you to marry your daughter." That is the way I phrased the question. Of course it was very poor grammar. I wasn't trying to ask Mr. Lexon to marry his own daughter. It was me - I wanted to marry his daughter.

Perhaps it was that impressive elocution, or maybe it was the fact she had just graduated from high school - I don't know which, but he didn't have to think very long: HELL NO YOU AREN'T! His elocution was much better than mine.

The whole scene was actually much worse than that, but in my imagination before getting the hook I thought it was going to be just like a Hallmark movie with everyone living happily ever after. The film was to include me popping a plastic stopper on my cheap bottle of sparkling wine, right at the same moment I asked her father <cue the strings.>

Instead of a love story, it became a Syfi horror flick. What really happened was a fountain of sparking wine emitted from the bottle opening right as the stopper made a dent in the ceiling. Trying to keep the flow from damaging the couch, I reacted by putting my mouth over the bottle. But instead of stemming the eruption of bubbly, I ended up turning myself into a champagne fountain with wine gushing out of my puffed out mouth and then my nose! Then I awaited her father's decision. 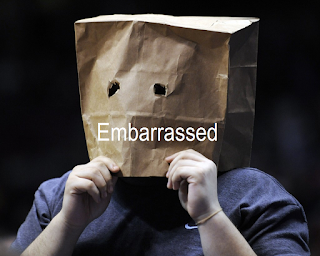 Needless to say that was pretty embarrassing for me, so if I had that whole event to do-over, I would have never asked her to marry me in the first place. I would have instead focused on getting my life on track first. But looking back, the painful truth is her parents were right. They had seen more of life than I, and knew marriage at that stage of our lives would have been difficult if not a complete disaster.

While hard for me to believe, today I'm older than her parents were back on that surreal evening. Age brings perspective that can be applied to life and career. I've never stopped learning and growing, probably because by nature I'm always trying to understand why things are as they seem, how things work, and how to improve. That's why I started the Annual SVB Wine Conditions Survey a decade ago.

I'm curious about this business, ill-trusting of what I read in the press, and want to help the business be better. So with this survey, I hoped to tease out for myself what winery owners are thinking and feeling. The survey results are now complete and were returned to the respondents in December. 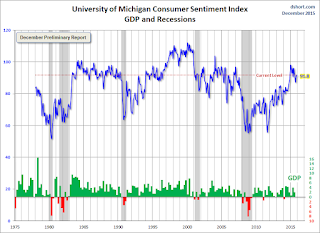 One of the additions to the survey this year was a winery confidence index. You will read a little more about it when we release the State of the Industry Report on January 21st, but it's a little like the Consumer Sentiment Index.

Without getting into the details of the calculation, the index had about 10 questions that gave response options of positive, neutral, and negative. For instance, one of the factors was "The Economy" and respondents only had to answer how the economy impacted them; positive, negative, or neutral. With a little math we are able to discern where perceived strengths and concerns lie.

The places where the business evidenced the most concern were the impact from imports, and from substitutes such as craft beer, spirits and legalized marijuana. That could be a surprise to some, but I think the industry is showing it's combined wisdom plucking out those two issues. 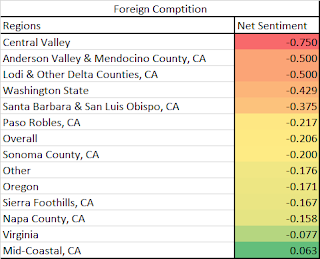 Who is most worried? We can slice and dice that up a little more and did so in the chart above. What it shows is the region most concerned with foreign competition is the Central Valley. That makes sense because of the negative impact they have felt from foreign bulk wine. As you move down the chart what you are seeing is regional sentiment regarding the fear of foreign competition. (It should be noted that the Central Valley did not deliver a statistically significant response and Mid-Coastal, CA is Santa Cruz and a few other adjoining regions that had few responses.)

My take-away is the regions that have the strongest brands are the least afraid. That is totally appropriate.

If you are a brand or in a region slugging it out with currency advantaged imports, you should be concerned today. Where do you find the weakest region or brand differentiation? In the lower price points. As the next chart shows to the above and left, wineries in the lowest price ranges are in fact appropriately concerned about imports.

One final chart that I think is worthwhile is the level of concern broken out by the number of years a winery has been in business. I didn't fare well in the request for my young lady's hand in marriage, but her parents were right to object because they had the benefit of experience. In the same way, if you want to avoid a business do-over, listening to those who have been through a few cycles is important.

Taking just the question of foreign competition and reviewing the chart, we can see an obvious trend. Those winery owners who have been around since about 1990 fear imports more so than wineries of a more recent vintage. Why is that? The folks with a little gray have been through enough cycles to remember when the dollar was strong against the euro currencies. In fact there was no Euro when they started in the business and there was a day when bottled imports made life difficult on U.S. wine producers.

Today foreign wine has about 35% of U.S. Consumption share, but the industry hasn't really seemed to notice or care because we've still managed to sell all the wine and see growth in the domestic business with improving price.
Substitutes

What about substitutes like craft beer and spirits? It turns out the regions aren't lined up quite the same way as the AVA chart tracking imports, but I've left that chart out as I can't draw conclusions using that one. For what it's worth, the Central Coast of CA is the most concerned about substitutes. By price points however, the charts looks pretty similar between substitutes and imports.

The reality is the newest wine drinkers entering their consuming years are more discerning about the quality of what they drink, but less about the type of alcohol they consume. The regions and brands who differentiate the most, are the least impacted by substitutes. Those new wine consumers are a little different from the aging boomers. They are just as likely to drink an imported wine, a craft beer or spirits.

What does that mean for the future of the wine business? I think it's a good idea to listen to the elders who have their views shaped by experience. Listen to their concerns. My advice is that like my do-over graphically described in detail above, realize youth will be served today but experience and time will shape their behavior, beyond what you read in the press today. Their consumptions habits will evolve. Don't get married to the behavior prematurely, then expect them to consume and believe the same in 10 years.

What Do you think?