I had some really intriguing calls the past 6 weeks that all come out of activity in Australia and Treasury Wine Estates in particular (TWE.EX). The calls centered on Beringer which has been rumored for sale for years. Those rumors have grown since the disclosure that Treasury Wine Estates had Beringer destroy $150MM in wine inventory in the US. Things got more intriguing last week with the release of the Morgan Stanley Report that predicted dire shortages of wine supply. All that traffic out of Australia ... so I started to wonder if the two events might be related?

In September just past, Treasury Wine Estates announced they were going to change CEO's. The disclosure came out during the company's Annual General Meeting just days after the departure of then CEO David Dearie. The announcement was made that....

"The Board is conducting a worldwide search, through the executive recruitment firm Spencer Stuart, to find a permanent CEO but this could take some time. We are advised that the average time for such positions to be filled is nine months."

It strikes me as odd that the Board would react to the inventory write down by letting the CEO go. They had to know about the write-down before the announcement was made, since it was such a material issue. I can't ever remember something like that happening before. Maybe the Board thought it was an acceptable action at first, but there was just too much heat and a sacrifice was needed. That's a reasonable explanation. Still ..... nine whole months to replace a CEO at a public company seems like a really long search to me. It's probably not a plumb job given the amount of digging out required, but there have to be suitable candidates available.

It's also odd that there wasn't a capable person internally that could have held fort for a few months. I can figure a few good reasons someone internally wouldn't want a temporary role ... new owners coming in make changes or if there really is a new CEO, those temporary people can often be moved out when the new sheriff comes to town. Whatever - it all adds to the intrigue as lots of things can happen in nine months ... things other than replacing a CEO.

The second set of calls I was taking this past week surrounded the Morgan Stanley Report which predicted dire shortages in world-wide wine supply. There was a Citi report also out of Australia in September that discussed inventory shortages in the US, but I dismissed it as uninteresting and dated at best. It seemed flawed on its face. But this second report got a lot of people's attention when Aaron Smith ( @AaronSmithCNN ) from CNN Money reported on it with the headline:

The phone and my email almost blew up from different news services and other industry insiders trying to make sense out of that one. The day after the CNN Money article, I got a call from Aaron Smith trying to make sense out of the blow-back on the report. He seemed like a well-intended professional. Not defensive in the least, he was digging for the other side of the argument. I wouldn't be surprised to see him write something at least offering the other view this week.

But back to the report: If you read it completely the analytics are pretty compelling. They really have done a good job pulling data together from multiple sources to deliver a top level view of the world wine market. They didn't rush to put this report out. It probably took months to research, write and produce. Most of the information is excellent - but it's the conclusions from the information that I question. Remembering they are a brokerage firm and writing investment opinions is their job, so a report will focus down from the economy, to the sector and segments, to a specific company .... the short read of their conclusion is:

Thumbnail Summary of the Report 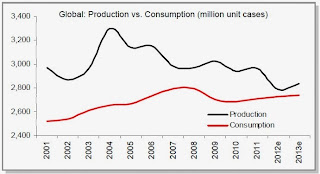 Is there a world shortage of wine? To the left is one of the charts they offered to further that premise. But when I look at it, it seems as if the world which for years has been sitting on a lake of wine, is actually getting closer to being in balance - at least in volume. That doesn't look like it supports their conclusion of shortage does it? Of course this isn't sensitized by price or by country, so we don't really know if there are pockets of shortages in price segments or within consuming countries and if there were, that could drive export volumes from countries such as Australia. 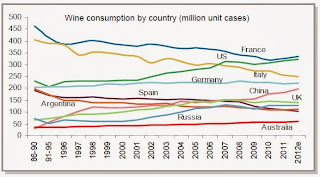 ... but they covered consumption in greater detail too. Looking at the chart to the left. It shows consumption declines in France and Italy, but growth in consumption from countries like China and the US. The Morgan Stanley analysts noted many times that France which they see as the largest consuming country, has started a rebound in the near term. The problem is the 2012 consumption year is an estimate and 2011 is the first year of increase in French consumption. Its really hard to predict a trend change with one data point.
I can't tell in the consumption chart how much of the earlier decline in French consumption was a secular decline due to changes in consumer patterns versus a cyclical change due to the global recession. I could see recovery from a recession explaining the one data point that went up in French consumption.
My guess - and one that seems to be supported from the OIV release, is there is a long term secular decline in per capita consumption in France, but the uptick in the past two years is due more to the global recovery. If that is true, that also negatively impacts the Morgan Stanley conclusions as once the global recovery were factored out of the data, we would expect to see a return to declining consumption patterns in France in the next year or so. Here's where I think they really went astray. 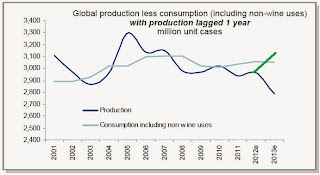 If you look at the chart to the left, it shows production and consumption. The Morgan Stanley analysts lag production by a year so as to account for cellaring. The problem is, they made up the production estimates for 2012 and 2013.

2012 might be a reasonable guess because it was a difficult year in much of the world with the exception of the record and near perfect harvest in the U.S., but what about the 2013 world harvest? The Southern Hemisphere was in the bag in the spring and the analysts had that information. Harvest down there was a good one. For some reason though, they guessed there is a massive decline in production that even exceeded the prior downward trend in production which started in 2004. The problem with the assumption is - it's just plain wrong because there is nothing that I can see that possbily supports that data point.

The OIV came out with a report recently that said world wine supply was back to 2006 levels in 2013. So I did the simple thing and corrected their chart above by drawing the next data point to match production level for 2006 as reported from OIV. Connecting the dots in green and .....voilà: no supply shortage! Actually there is an excess this year in production versus consumption, and upon that one data point in 2013 and the extrapolations therefrom, lies the complete foundation for the Morgan Stanley conclusions. They don't come close to holding water.

Is the Inventory Write Down at Beringer and the Morgan Stanley Report linked?

Inventory write-downs are the kind of thing that one might do if one were inclined to position a company for sale ... or a change in senior management. There is a change in management at Treasury as discussed, but rumors persist about Beringer being for sale and have permeated the market for years.


Personally, I would love to see someone recover what has become a dusty brand, because Beringer has historic significance in the wine business. My own opinion is many of their vineyard holdings could produce unbelievably good wines. It's a rare opportunity for the right buyer to come in and course correct this business because the brand and vineyards have significant value from which someone with a fresh set of eyes might be quite successful..... especially if there is a shortage in wine grapes ..... which there isn't.

Finally, there are some footnotes and disclosures in the Morgan Stanley Report that are probably boilerplate as I've been told but still bear being brought out:

I can't say for certain that Beringer is on the block. I can't say if Morgan Stanley is making a run at representing Treasury Wine Estates in a sale of the whole of the TWE operation, or just the Beringer assets either. While they have disclosed that they might have a conflict of interest and might seek compensation for investment banking services in the next 3 months .... a conflict like writing a buy opinion to ingratiate oneself to management .... I can't say they do have a real conflict nor do I have any knowledge that Morgan Stanley has been in the background encouraging an inventory write-down and preparing the company for a sale. I'm only thinking out loud and I'm just sayin' .....

Please log in and offer your thoughts for the community. If you think it worthwhile, please share this post on your favorite social media platform and consider "joining the site" below.