Is Demand for Wine Dropping?

I saw the above video last week referencing demand for wine and the title got my attention. Is the demand for wine really falling? When you watch the video above many people might think so, but I don't really put a lot of faith in LiveEx as a measure of demand for fine wine. This might be speaking to Bordeaux largely and LiveEx might have use in other areas but not for overall consumer demand.

Last week we did a version of a Mid-Year State of the Industry Blog, but in it noted that its hard to do a State of Anything in a blog so we left out consumer demand. With this video clip from Bloomberg hitting the interwebs, I thought it might be worthwhile to debunk the above perspective.

In the 2013 SVB Annual Wine Report we predicted sales growth between 4% and 8% in the fine wine segment. One of the factors that we considered in the forecast was the expectation of a rough first part of the year as sequestration kicked in, pulling back the growth rate in demand. But we also believed the back half of the year would be better as we bottomed in the housing market and the consumer started loosening their purse strings.

It seems as though we were pretty close in the blue-print, but at this stage it appears sequestration didn't have the dire impact many in Washington predicted and in fact has improved the Debt to GDP ratio to the point where our Debt Rating was upgraded again to AAA. We have seen the bottom of the housing market and continue to see improvement in consumer and retail spending though it remains to be seen how we did predicting the back half of this year. That said, according to information provided from Wines & Vines in cooperation with IRI, off premise sales through July are up 7% for 12 months. 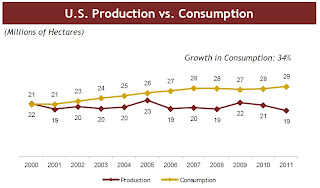 Moving to one more perspective, a compilation of data provided by Demeter Group shows continuing growth in overall US consumption, consistent with flat to declining hectares of production. That gap between what is planted and what is consumed is being met with imports. The 2012 harvest size at this point in the year has slowed down the continual march upward of the growth in market share for imported wines. That said, as of this writing and as mentioned last week, the harvest in the Southern Hemisphere appears good, and with the US Economy still seemingly recovering ahead of the rest of the world, one has to believe the dollar should strengthen against a basket of currencies thus favoring import growth.

Of course this is such a big topic and only a small top-of-mind commentary on where we sit today, but I don't want to lose my Blogger Credential that requires brevity in prose. Hopefully this is enough for you to agree with me the Bloomberg video above isn't properly representing the state of consumer demand in the US. Consumer demand for wine continues to rise by all measures and if our early year forecast proves out, should increase YOY through the end of 2013.
What are your thoughts? Please log in and offer your views about growth in wine sales and consumer demand at this point in the year.